All about Karen Kougar’s mambos, muff and butt 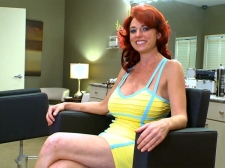 “I not at any time say no to showing off my mambos,” Karen says. “I’m truly cheerful with ’em.”

This babe should be.

“It was hidden in a very, very unfathomable, dark-skinned place,” she says.

It had been up her wazoo for two hours this morning, then the night previous to, and on the plane.

Yeah, that babe was sitting on the plane wearing a ass-plug. Gotta love those MILFS.

“This is the first time anyone has seen me in film as a redhead,” Karen says.

During the course of this interview, Karen exposes off her wazoo and slaps it. That babe reveals off her lippy slit. Really, this babe spends majority of the final five minutes of the interview touching her cum-hole, which can be a little distracting.

Unless, of course, all you care about is seeing her cookie.