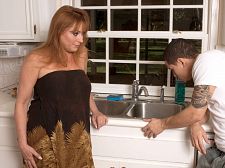 You know, sometimes we think we oughta have our heads examined. Here’s Gigi Jewels. The first time she visited us, she said, “I decided I wanted a relationship, and that’s why I moved to South Florida.” So what do we do? We have her play a wife whose husband is cheating on her, fucking tramps all over town, as she puts it in the opening minutes of this video.

Now, yeah, Gigi is only playing a role. But this is the kind of message we send to her? That husbands and boyfriends cheat, even on their hot wives/girlfriends? Not nice, gentlemen. Not nice at all. But then again, we don’t want Gigi to get married or find a boyfriend. If she does, he might tell her to stop fucking for us, and that definitely wouldn’t be nice.

By the way, in this video, Gigi gets revenge on her fictional husband by fucking a fictional plumber. But his cock is real, and her pussy and dick-sucking mouth are real, so in the end, we all get what we wanted.