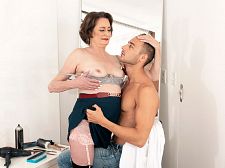 Welcome to Renee Kane‘s hair salon. It’s an at-home hair salon so she can give her customers extra-special attention. Especially her male customers.

“I don’t mean that kind of a blow,” she says, and then she shows him what kind of blow she does mean. Before long, Renee is taking advantage of the proximity of her hair salon to her bedroom and is getting her pussy fucked. Her 60-year-old pussy, that is.

And that’s the scenario of Renee’s first on-camera fuck, something she never thought would happen.

But then Renee’s ex-husband–her first of two ex-husbands–pointed her in our direction, and here she is!

“This is his ultimate fantasy for me to be doing this,” Renee said. “He keeps on calling me because he wants to hear all about it.”

Renee is from Detroit, Michigan. She lived in Washington, D.C. for 32 years, and now she’s back in Detroit.

Oh, and that “different work” Renee was doing? She really is a hairstylist.

Has she ever fucked one of her customers?

“No,” she said. “My skirts are very short, but I never have my boobs hanging out. But I touch people a lot because I enjoy that. I know they like it, but I’m not rubbing on them. I’m just touching them. A lot of people don’t get touched at home. Even women that come in, they don’t want to get out of my chair because they don’t get any attention at home. They don’t get touched enough. It’s a very sensual business. You really are caressing and touching people and comforting them. And I know the guys get really turned on. The guys come in every three weeks for a haircut when they’re half bald.”

Can’t say we blame them.