JOI and fuck talk from a real stunner 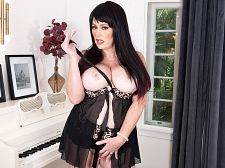 Sherry Stunns is a busty, sexy, dark-haired 51-year-old mother and grandmother who was 47 when she debuted at 40SomethingMag.com in 2017. The last time she was here, she was married. Now she’s divorced.

“Do you like what you see?” Sherry asks at the start of this video, sucking on her finger like it’s a cock. She’s wearing skimpy, leopard-print lingerie. Her F-cup tits are busting out. And she’s wearing crotchless panties for easy access to her “holes,” as she calls them.

WARNING! This video is loaded with nasty fuck talk. Sherry will encourage you to jack off!

We asked Sherry if the people back home in Tampa, Florida, would be surprised to see her here.

“Not at all,” she said. “I’ve always been a free-spirit. One time in New York City, I took on five guys to see if I could, and I was air-tight and I loved it.” When we asked her what she’s not into, she said, “I haven’t found it yet”

50Plus MILFs: Did you see the scenes you shot last time you were here?

Sherry: Yes, and they were hot!

50Plus MILFs: Did you watch them with somebody?

Sherry: I watched them alone as I was with a very insecure person that was jealous. I am no longer with him due to a lot of those issues, so, yes, I am single now!

50Plus MILFs: What did you think about them?

Sherry: I loved them! I masturbated to them, but I had to be a sneak and watch them when I was alone. I guess I also turn myself on as an exhibitionist!

50Plus MILFs: So you haven’t had sex while watching your scenes?

Sherry: Unfortunately, no. I haven’t found that special person yet.

Are you that special person? Sherry wants to know.